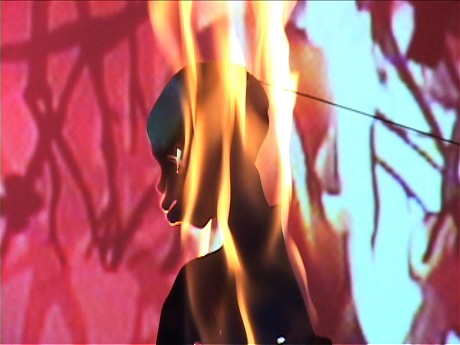 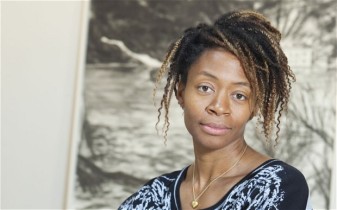 At first glance you cannot quite believe what you are seeing. Life-sized silhouettes made of black paper have been pasted directly on to the gallery walls.

The cut-outs, you realize with a kind of mounting horror, comprise a deeply racist depiction of plantation life in America’s antebellum South. In one corner are outlines of thick-lipped minstrels, fat mammies and luscious young girls with jutting haunches. Over there are silhouettes of podgy plantation owners and petticoated Southern belles.

The figures are like the inhabitants of some nightmarish Freudian dream world, groping, sucking, ejaculating, defecating and doing terrible things both to themselves and to one another. Half of you wants to look away from the gallery wall in disgust, while the other part feels compelled to stand and stare.

To say that Kara Walker is used to causing controversy would be an understatement. Ever since the 43-year-old African American artist took the cultural establishment by storm 20 years ago with her mural ‘Gone, An Historical Romance of a Civil War as it Occurred Between the Dusky Thighs of One Young Negress and Her Heart’, critics have accused her not simply of going up to the edge but plunging right over it.

By attempting to expose hateful racial fantasies, they argue, she ends up giving them an obscene vitality. Walker’s advocates, on the other hand, claim that her work functions as a devastating critique of the way that all of us, black as well as white, continue to be complicit in ethnic stereotyping in the 21st century.

And now, we will finally get the chance to make up their own minds, with the opening of her first solo show on this side of the Atlantic at the Camden Arts Centre, featuring several new works. 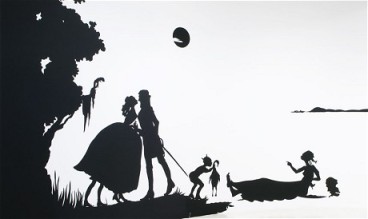 Detail of ‘Gone: An Historical Romance of a Civil War as it Occured b’tween the Dusky Thighs of One Young Negress and Her Heart’ (1994) (Karen Walker)

At the home in New York City which she shares with her 16-year-old daughter Octavia, Walker admits that she is not sure what reaction her work will receive from British gallery goers.

For despite the brash in-your-face quality of her work, in person she has all the thoughtful tentativeness of an intellectual, weighing each of her words with consummate care.

“The story of race in the UK is markedly different from the US,” she explains in her quiet, careful voice. By which she means that while the US had slavery, the Civil War and the Jim Crow era of segregation, the UK’s experience of mass black immigration didn’t start until the 1950s with the Windrush generation.

All the same, the mythology that Walker draws upon in her work is a global one: Gone With the Wind, Uncle Tom’s Cabin and the Disney version of Dixie in the 1946 animation Song of the South all peddle a series of stereotypes that are as instantly recognisable in Aberdeen as they are in Atlanta.

Confronted with the images in Walker’s Camden show, it takes less than a second to identify stock figures such as the Confederate soldier, the minstrel, the mammy, and the spear-wielding African savage.

Kara Walker did not arrive into the world in 1969 feeling angry. She describes the first 13 years of her life in northern California as pretty much “colour blind’: “I’d been protected from considerations of race”.

With a father who was both a university professor and an artist and a mother who was an administrator, Walker grew up in a middle-class, multi-cultural environment playing with friends who were of Latino, Chinese and African origin.

It was only when she was obliged to move with her parents to Atlanta, Georgia, as a teenager that she began to be aware of the long shadow cast by decades of racial segregation.

“Even though the era of Jim Crow was officially over, you felt the oppression everywhere,” she explains. “I only had to sit at the wrong lunch table at high school, and face a barrage of hostile looks and questions, to realise that race was still very much a live issue.” 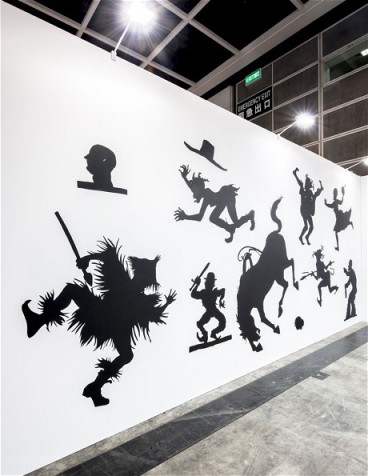 It didn’t help that the suburb where the Walker family had settled was the centre of revived Ku Klux Klan activity. Nor, she explains ruefully, that theAtlanta Child Murders, a period of three years in which 23 black children were killed, were on the nightly news.

“I went to bed each night knowing that there was a man out there who was coming after black children, which only added to my sense of paranoia.”

Much of that paranoia is still apparent in Walker’s work 30 years later. In ‘The Daily Constitution 1878’, a graphite drawing from 2011, two young black girls are hung from a tree by two middle-aged white men, one of whom throws his hat into the air with pleasure.

Meanwhile, in 2010’s ‘Dixie in the Dogwoods’, a black man appears to violently sodomise a white woman, while a white and black woman look on impassively.

When it comes to giving offence, Kara Walker is an equal opportunities artist: “I want the viewer to feel a giddy discomfort – the same sort that happens when I’m making the work.” Walker admits that this “jokey” aspect of her work often gets her into trouble with people who find her graphic images the opposite of funny.

But still, as she explains in her measured, thoughtful way, by making the audience complicit in her images (it’s up to us to fill in the backstory) she is hoping to bring us face to face with our own fantasies about race, sex and power.

Walker explains that it was not until she had moved north to study for her Masters in fine art at Rhode Island School of Design that she started to experiment with both the form and the subject matter that would come to make her name.

Her professors were urging her to produce painting that was “identifiably black”, without being able to explain exactly what they meant. Walker, though, had always been drawn to folk and commercial art – comics, badges, souvenirs – the kitscher the better.

By reviving the old craft of silhouette-making she reckoned that she might be able to say something important about the way she felt excluded from the high table of fine art.

Usually associated with genteel Victorian ladies, silhouettes are used by Walker to focus the viewer’s eye on crude symbols of racial identity – black characters are picked out by their thick lips and flat noses while the white characters all have chiselled features.

“The silhouette says a lot with very little information,” Walker has said, “but that’s also what stereotype does.”

It is this dangerous playing with racist imagery that has so inflamed Walker’s critics. When, at the age of 27, she became the youngest ever recipient of a hugely prestigious “genius” grant from the MacArthur Foundation, an older generation of black artists, who came to maturity in the Civil Rights era, were outraged. 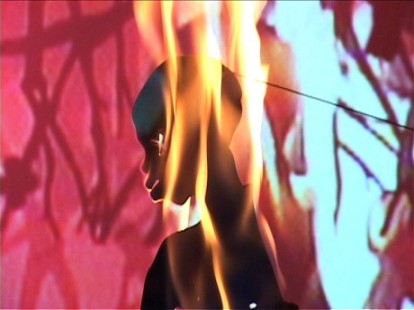 One in particular, Betye Saar, conducted a noisy campaign to get Walker’s work banned from public galleries, arguing that her imagery played straight into white fantasies about black people as a sexualised underclass.

However satirical and angry Walker intended her work to be, Saar argued she was still betraying her own people. Walker, in return, says in her calm, moderate way that she is “suspicious about this idea that there is just one authentic black story and that is the only one you are allowed to tell”. For her “the black experience” is not only always plural, it is often messy and perverse.

Still, for every gallery that has refused to show Walker’s work, there are scores that have been delighted to promote an artist who in 2007 was ranked by Time magazine as one of the top 100 most influential people in the country.

Like her UK contemporaries, who made up the “Sensation” generation – Tracy Emin, the Chapman Brothers, Damien Hirst – Walker is now regarded as a respected member of the art establishment.

Her work regularly changes hands these days for as much as £200,000 and is shown in prestigious venues all over the world, and she is now a Professor at Columbia University.

Perhaps the most challenging part of her show will turn out to be an 18 minute film titled ‘Fall Frum Grace, Miss Pipi’s Blue Tale’. The figures are Walker’s familiar silhouettes, this time mounted on wire to turn them into crude puppets, activated by the artist herself who also supplies the voices. In the film, southern belle Miss Pipi seduces a slave who is in turn tortured and murdered by her jealous white lover.

The scenes of sex and violence are punishingly graphic, made all the more uncomfortable by the accompaniment of a lush 1970s soundtrack. Most disconcerting of all, however, is the fact that you can hear Walker’s gusty laugh in the background as she manipulates her figures into their obscene poses.

Walker is resigned to the fact that she will get a lot of flack for ‘Miss Pipi’. But she’s had 20 years to get used to what she describes matter-of-factly as “personal attacks”.

“I’m ok with it,” she insists, before adding with a dash of her signature merriment, “Well, I guess I am.”