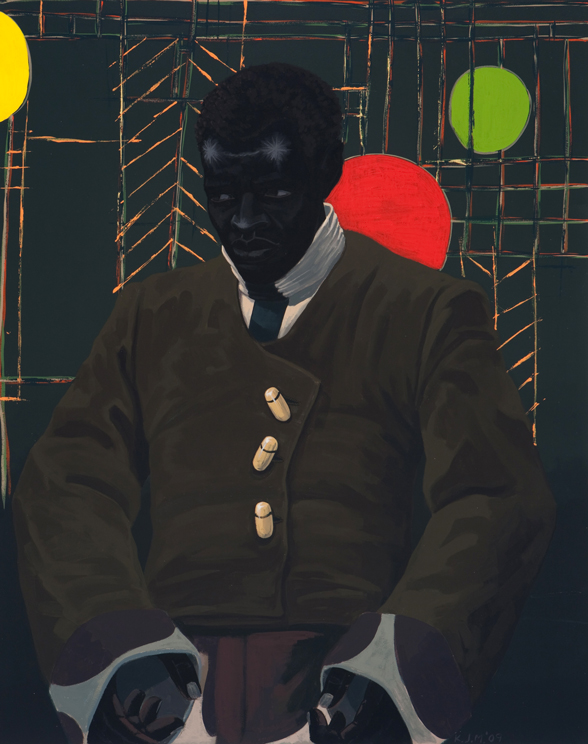 Kerry James Marshall, Nude (Spotlight), 2009  Defares Collection, The Netherlands
~
Kerry James Marshall has been well established for many years, particularly in the United States, and especially in the city of Chicago, where he lives and maintains his studio. In fact, he is widely seen as the most significant artist in the city and a major influence on the subsequent generation that has emerged there. This includes the likes of Theaster Gates and Rashid Johnson, who, like Marshall, have also put the African American experience at the core of their respective practices.

Marshall is best known for his reflections on the everyday, as in De Style(1993) and Our Town (1995). Yet this is just one way of thinking about the breadth of work he has produced over the decades. He is especially concerned with the means by which we visually apprehend the relevant issues of our day—the circulation of images through the world, and how those images affect our understanding of race and individual identity. Through his practice, Marshall tackles what he has referred to as “the lack in the image bank.” He looks at images generated across a broad range of spheres—society, culture, art—and responds dialogically with a new body of images made from a variety of counter-perspectives. Significantly, it is in this way that his work transcends the confines of the American context and becomes globally resonant.

Marshall is an avid collector of all kinds of things, and has been for many years. A visit to his studio reveals a veritable curiosity cabinet of images and objects. There are dolls everywhere, which he sometimes uses for maquettes. There are small animal models and plastic plants. And there are tens of thousands of clippings from magazines, newspapers, and books—some organized in folders, many more loose in suitcases. These clippings, all of which contain representations of black people, are Marshall’s personal image bank. They can be categorized into two distinct groupings: images of black people in society, and images of black people in art. As a whole they provide a sense of the kinds of roles and stereotypes that operate in image culture. They also begin to tell a story about what is missing—and ways in which people are not represented.

Marshall’s video Gleaning: An Image Reclamation Project is an ongoing undertaking, begun in 2003. It is an ever-growing sequence of images of faces and body parts, drawn from his collection of clippings. He edits it in a way that specifically foregrounds the gaze toward the black subject, and the relatively narrow range of existing representations thereof. The video also conveys an awareness that images of the black subject play a historicizing role connected with the legacy of colonialism and slavery. If you have been exploited in history, in other words, you can be exploited further through your portrayal in images. Yet it is not ultimately Marshall’s intention to dwell on post-colonial theory. Rather, it is about addressing the condition of images in the world and offering lucid methodologies of progress.

The history of art in the European tradition has evolved its own system for producing the kinds of images it does, as well as self-determination in terms of what it values. We only have to glimpse back at the institutional theory of art to understand this. It has been a decidedly hegemonic affair, to say the least. Black subjects appear rarely enough to be remarkable when they do, as for example in Édouard Manet’s renowned painting Olympia (1863), which shows a nude woman looking directly at the viewer, and a black servant with a bunch of flowers standing behind her. Marshall’s recent painting Nude (Spotlight) (2009) recalls Olympia and is conceived according to what the critic Kobena Mercer once described as Marshall’s typical “rhetorical blackness.” In this new work, the harsh light that falls on the woman in the Manet becomes a literal, direct spotlight. The nude still directs her gaze at the viewer, but the servant is conspicuously absent. It is a beautiful, culturally loaded work that brings a vividly different kind of character into dialogue with the canonical lexicon of art history.

The will to address art’s history occurs often in Marshall’s practice. His ongoing series of Vignettes (2005–ongoing) brings black subjects into the Rococo style of painting, for example, and Black Star (2011) has a gung-ho female nude bursting through an abstract painting done in the sober style of Frank Stella. But are these works really attempting a simplistic sort of counter-hegemony? All too often, it has been observed, art that too directly challenges the status quo inadvertently becomes what Hal Foster calls an “inoculation” for the establishment. Meaning, a small dose of something potentially harmful can ultimately serve to bolster immunity, to reinforce resistance to change in existing structures.

But Marshall’s works are more complex than this. They bring other perspectives into focus, emphasising different possible interpretations and directions for the use of artifacts from art’s history. His 2012 triptych Who’s Afraid of Red, Black and Green?, exhibited for the first time last year at Vienna’s Secession, tackles Barnett Newman’s’ “Who’s Afraid of Red, Yellow and Blue? (1966–70) by changing the palette of primary colors to those of the Pan-African Flag. Marshall also departs from Newman’s monochromatic approach by including elements of figure and ground, pictorialization and text. The work could be read as tackling the dubious claim of Modernism to offer some kind of universality of experience; as soon as it is considered in the context of the non-Western world, it becomes clear that it is yet another manifestation of Western imperialism. Similarly, the recurring, tenacious discourse around abstraction and universalism, and its promise of a kind of democracy of aesthetic experience, has only served to highlight subjectivity and individuality. With this series Marshall reorients an icon of Modern art into a different, but equally historically meaningful, signifier from the same era—one that was used in the campaign for racial emancipation. It is a mode of discourse and attitude that has its own complexities. In this instance, merely by changing a selection of colors, it offers a direct confrontation against historic notions of utopian idealism in art.

The idea of commemoration, as played out in imagery, also plays a prominent role in Marshall’s work. Sometimes he focuses on how we undertake commemoration on a personal level. The Lost Boys series (1993-95) is a collection of nine portraits of young men who have, for various reasons, been imprisoned. The titles include their nicknames: “aka” followed by “Black Sonny” or “8 Ball,” for example. The pictures are, in a sense, memorials to the men’s nonexistent futures, their lost freedom. Marshall’s work also commemorates on a more collective social scale, as in the series We Mourn Our Loss (1997-98) and Souvenir (1997-98). The former shows portrait images of leaders from American history who were assassinated, including John F. Kennedy, Martin Luther King Jr., and Robert F. Kennedy, painted into compositions that resemble memorial banners. These banners occasionally recur in the Souvenir paintings, placed into domestic spaces along with images of other renowned cultural icons who have passed away. We have a certain attachment to images. They are, after all, one of the primary ways in which we—as individuals or as collectives—maintain meaningful emotional attachments to those who are gone.

Another type of image flow prominent in society is portrayals of idealized representations of the body through advertising and the media. We are particularly heavily bombarded with images of women, filtered so that almost all we see are body types unobtainable for most. Historically these images have also been limited in terms of the spectrum of races portrayed; in fact they have been nearly exclusively Caucasian. And although today things have changed, given the attainment of megastar status by African American celebrities such as Beyoncé or Halle Berry (to give two well-known examples), it is fair to say that what the mainstream considers beautiful is still quite limited in scope.

For Marshall, the notion of beauty is closely connected with our collective image bank. Nude (Spotlight) gets at this, as does Beauty Examined (1993), the latter depicting a woman lying on a bed with different parts of her body being examined for faults. At the top of the painting, “Exhibit A” objectifies the woman with a series of diagrams and comments suggesting how she deviates from the ideal: “big legs,” “big ass,” and so on. Other works, such as La Venus Negra (1984) or Supermodel (Female)” (1994), bring blackness into realms of representation—art history and the mass media, respectively—that are ordinarily dominated by whiteness. Marshall’s implication with these works and others is that we need many more images in our collective image bank that overtly require us to consider racial difference.

Marshall’s understanding of society’s image bank casts it as a sort of empire—something that yields great currency and great powers of discrimination, and serves to impose and normalize ideals. The flow of “traffic” occurs in one direction only, meaning that individuals have relatively little control over, or ownership of, what they see. His ambition is to demonstrate that we can make images our own: reclaim and adapt them, and create new ones that represent the individual realities we actually exist in. Marshall wishes, in a sense, for us to understand the instability of images, and how art offers a special license to appropriate, change, create, and interpret them, then push them back into the public sphere. The sense of ownership he creates through his style of image making is something that should be considered progressive—necessary, even. It is a more inclusive, perhaps even communitarian, understanding of the role of representation as aiming to counter the massive hegemony of images by expanding the repertoire of our collective unconscious.