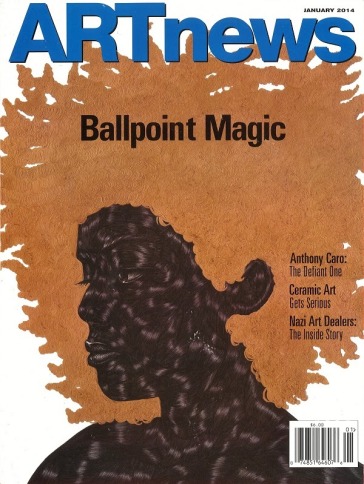 Ballpoint Is on a Roll

Accessible and affordable, the ballpoint pen has become the medium of choice for artists to make obsessive abstractions, extreme drawings, and playful riffs on venerated ink traditions

“Last August, Toyin Odutola brought a stack of ballpoint pens and markers into the Asian Art Museum in San Francisco, sat down, and drew a picture. A large screen projected her progress as she filled the paper with thousands of marks. Museumgoers circled around her and asked her questions. “One lady was like, ‘Is that pen? I don’t believe it!’” Odutola recalls. “I was drawing, and she took the pen out of my hand and looked at it.”

To shut out these kinds of distractions and focus on the task at hand, Odutola put on headphones and listened to dance music. Four hours after she started drawing, she was done, having produced a densely limned portrait of an Asian woman with golden hair and eyebrows, her skin composed of Odutola’s signature sinewy ballpoint lines, with blue, green, and flesh tones rising from underneath. “It was shocking that I finished, because I’d never really performed drawing,” says Odutola, who was born in Nigeria and grew up in the Bay Area and Alabama. “It’s normally a very solitary act within my studio.”

To read complete story and view art created with ballpoint pen, pick up a copy of the January 2014 issue of ARTnews on newsstands now or read online here.