From the Contemporary Arts Museum of Houston: 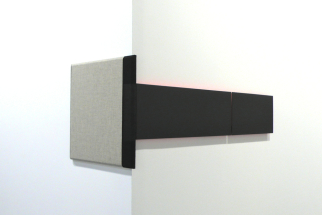 Jennie C. Jones: Compilation is a mid career survey spanning 10 years of this conceptual artist, painter, sonic artist and sculptor’s career through two site specific installations, a mural, works on paper, paintings, sculpture and sound.  The exhibition will also include a listening room / theater for her sound works and a soundtrack to provide audio for the exhibition space. The exhibition is was featured recently at the Brown Foundation Gallery at The Contemporary Arts Museum of Houston (CAMH).

Born in Cincinnati, Ohio in 1968 and now living and working in Brooklyn, NY, Jennie C. Jones’ website bears a caption: “listening as a practice”. CAMH Curator, Valerie Cassel Oliver is quoted in the Houston Press as saying about Jones that, “as a young woman and as a child, she was exposed to experimental jazz; she grew up listening to it … she realized that, even as a painter, she would always take a bit of time sort of constructing, sort of listening, what she’ll play and what she’ll listen to as she’s painting, and she came to realize that sound became an important part of the visual; she needed it. From there, it becomes this leap between the two avant-gardes.”