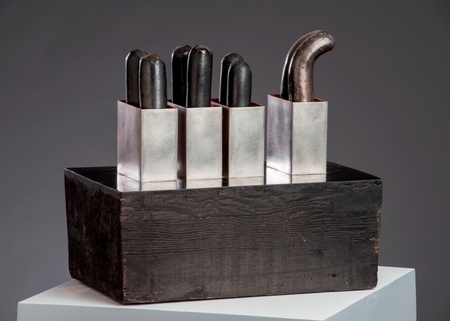 Donald Locke (1930-2010) was a versatile and complex artist whose ability to express a vivid interior existence while simultaneously opening himself to some of the larger issues of our time is reflected consistently throughout his career. He had been on a restless intellectual and artistic quest since the late 1940s when he began to study art in his native Guyana. At the dawn of the independence era in Africa and the Caribbean, in the fifties and sixties, Locke was a seminal figure for an emergent post-colonial generation. His rich and varied cultural experience was integrated into a critical framework that engaged with issues of history, identity and authenticity. However, he remained philosophically and stylistically an internationalist whose work reflected his integrative approach to life and art.

The exhibition highlights a selection of paintings and sculpture from the Plantation Series of the 1970’s when he was still living in London, which confronts tradition while absorbing the formal tenets of modernism. His mixed media sculpture exponentially expanded the definition of modern ceramics through novel techniques, unusual media, and carefully conceived relationships to surrounding spaces.

Shown together for the first time in New York these early significant works are pure meditations upon the nature of shadow and light, material, texture and lines, and represent important ideas that capture moments of significant aesthetic development of the artist. As stated by Locke in the journal ‘American Visions’: “These are sculptural metaphors where forms are held in strict lines, connected together as If with chains held within a system of metal bars or metal grids, analogous to the system whereby one group of people were kept in economic and political subjugation by another group”. Over the years, Donald Locke developed a sculptural approach to clay that allowed him to endow familiar forms with significance. An artist who valued the creative process as a system of thinking, his ceramic sculpture is all the more arresting because of its intriguing combination of opposites of freedom and precision, of the texturally marked and smooth, of weight and buoyancy, of mass and space. .

Born 1930 in Stewartville, Demerara County, Guyana, South America. Donald Locke studied at Bath Academy of Arts, Corsham, England, 1954-57 on a British Council scholarship where his teachers included some of Britain’s leading avant-garde painters and sculptors including the renowned sculptor James Tower. In 1964 he graduated with honors from the University of Edinburgh, Scotland with a masters degree in art. After returning home to Guyana to work and teach for some time, he returned to Europe where he lived and practiced until he was awarded a Guggenheim Fellowship in 1979. He represented Guyana at the Twelfth Sao Paulo Biennial in 1971 and The World Black Festival of Arts, Lagos, Nigeria, 1977. He is in several collections including Victoria and Albert Museum, London, The Guyana National Collection, Georgetown, Guyana, and the Studio Museum in Harlem. The Tate Britain recently acquired Trophies of Empire, an important mixed media work by the artist from 1972-74, which was included in ground breaking exhibition ‘The Other Story: Afro-Asian Artists in Post-War Britain’ organized by Rasheed Araeen, 1989-90 at the Hayward Gallery, London.