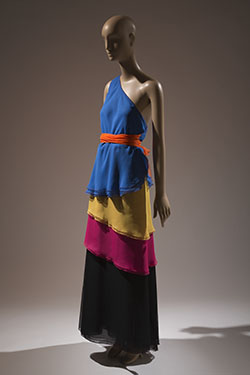 From The Museum at FIT

There have been past exhibitions about individual black fashion designers, such as Stephen Burrows and Patrick Kelly, but this exhibition explores the experiences of several generations of fashion designers of African descent from the 1950s to the present. The curators acknowledge the problem of using race as a lens through which to view fashion design. Fashion journalist Robin Givhan addressed the implications of such categorization when she described the Pyer Moss spring 2016 collection by designer Kerby Jean-Raymond: “It was a startling and emotional reflection of Jean-Raymond’s fatigue over being described as a ‘black’ designer. Not because he isn’t proud of his heritage and not because he doesn’t bring his full self to his work, but because the nomenclature is limiting

The designers featured in Black Fashion Designers work in a diverse range of individual styles; they do not all speak in one voice. The exhibition draws exclusively from the permanent collection of The Museum at FIT and is organized according to categories and themes, such as eveningwear, menswear, street style, experimental fashion, and African influences.