From the Whitney Museum of American Art: 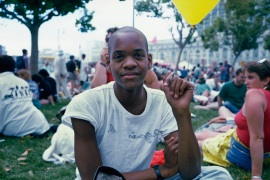 Image Credit: Lyle, Gay Pride Parade, San Francisco, 1989 (from Today I Shall Judge Nothing That Occurs, Aperture 2017), Courtesy of the Whitney Museum of American Art

To celebrate the publication of Today I Shall Judge Nothing That Occurs, a book of Lyle Ashton Harris’s Ektachrome archive, Harris is joined by an intergenerational group of artists and writers for a night of conversation and reflection.

Throughout the late 1980s and early 1990s, Harris photographed the radical cultural scene that emerged in cities across the globe, finding expression in the galleries, nightclubs, and bedrooms of New York, London, Los Angeles, and Rome. His archive of 35 mm Ektachrome images has now been published alongside journal entries and recollections from a host of artistic and cultural figures.

Addressing the Ektachrome Archive in relation to the historical period in which it was produced and in light of contemporary political and social concerns, this series of talks examines how the archive has expanded from a personal document of a historically significant period to a contemporary living document, and how this work serves to complicate our collective memory.

This event is co-organized by Aperture Foundation and the Whitney Museum of American Art.