From The Metropolitan Museum of Art: 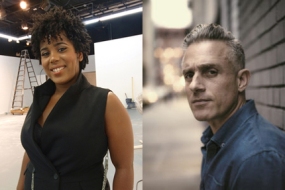 (New York, June 5, 2018)—The Metropolitan Museum of Art announced today an initiative that provides support and partnerships for artists working and living in communities across New York City’s five boroughs. The initiative’s leading component is the Civic Practice Partnership, a collaborative residency program for New York artists committed to social change. The inaugural artists are choreographer and performance artist Rashida Bumbray and multimedia visual artist Miguel Luciano. They will partner with The Met to develop and implement vital, ambitious collaborations between the Museum and their geographic communities: Bedford-Stuyvesant, Brooklyn, and East Harlem, respectively.

An additional component of the initiative, the Civic Practice Seminar, will engage a group of individuals who work in cultural fields—including visual artists, musicians, and writers, all of whom are socially mindful in their practice—in a five-month experiential learning program. Selected through an open application process, they will receive a stipend for their participation in the program, which includes working closely with lead artists Bumbray and Luciano and Met staff to fine-tune their skills in areas such as community engagement, social practice, and reciprocal relationship building. For the application details, visit the Museum’s website.

“Both the Civic Practice Partnership and Seminar programs engage with artists and individuals who think creatively, critically, and beyond the traditional boundaries of their artistic practice. This initiative is part of our ongoing efforts to deepen The Met’s engagement with communities throughout New York City,” said Daniel H. Weiss, President and CEO of The Met.

This initiative is made possible by The William R. Kenan, Jr. Charitable Trust and is part of their unprecedented $6 million City-Wide program launched in 2017 to support 21 cultural institutions in collective action. New York University’s Tisch School of the Arts and The Metropolitan Museum of Art serve as the anchor organizations.

“The Met not only serves as a space for creativity and inspiration, it also has a deep commitment to generate new and meaningful connections directly in our New York City ecosystem of neighborhoods,” said Sandra Jackson-Dumont, the Museum’s Frederick P. and Sandra P. Rose Chairman of Education. “We’re excited to begin this incredibly important work in partnership with two artists invested in reciprocal community practice to create relevant new art and forge lasting partnerships with the East Harlem and Bed-Stuy communities.”

The two artists selected to kick off the Civic Practice Partnership, Rashida Bumbray and Miguel Luciano, will spend a year researching and collaborating with the Museum as well as in their communities.

Rashida Bumbray will focus on a collaboration within her neighborhood of Bed-Stuy, where she has lived for nine years.”This partnership offers a time to think deeply about context and site specificity,” said Bumbray. “We know that objects hold the memories of the context in which they were made and made functional. How can I consider the functionality of the objects in The Met collection in connection with neighborhoods around the city-specifically Bed-Stuy?”

Miguel Lucianohas been working with communities and institutions in East Harlem for nearly 17 years. Through this partnership, he will explore the historic connections between the East Harlem community and the Museum. “The most promising aspect of this opportunity is the focus on neighborhoods and communities as centers of cultural production,” said Luciano. “I’m currently developing work that focuses on the activist history of the Puerto Rican community in East Harlem and interested in exploring the role that art and culture have played in social movements during times of crisis, from the post-civil rights era to the post-hurricane Maria present.”

Read About the Civic Practice Seminar