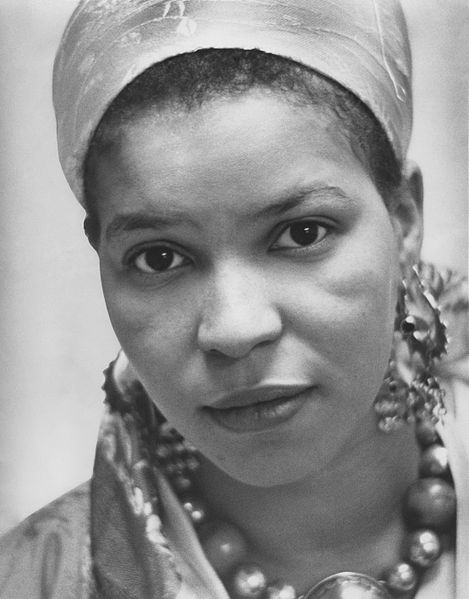 Over the weekend, the editorial team had to mentally process the transition of Ntozake Shange: Writer, Poet, Novelist and Scholar. View, bookmark and experience the curated-creative magic by Shange, one of the most prolific literary artists to take creative writing to a new level – her own way, her story, her. 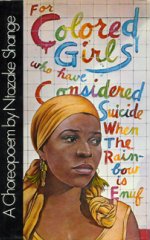 Image: Derived from a digital capture (photo/scan) of the book cover (creator of this digital version is irrelevant as the copyright in all equivalent images is still held by the same party). Copyright held by the publisher or the artist. Claimed as fair use regardless.

Shange attended Barnard College (B.A., 1970) and the University of Southern California (M.A., 1973). From 1972 to 1975 she taught humanities, women’s studies, and Afro-American studies at California colleges. During this period she also made public appearances as a dancer and reciter of poetry. Her 1975 theatre piece For Colored Girls Who Have Considered Suicide/When the Rainbow Is Enuf quickly brought her fame. Written for seven actors, For Colored Girls is a group of 20 poems on the power of black women to survive in the face of despair and pain. The show ran for seven months Off-Broadway in New York City before beginning a two-year run on Broadway. It was subsequently produced throughout the United States, broadcast on television, and in 2010 adapted into a feature film titled For Colored Girls.

Shange created a number of other theatre works that employed poetry, dance, and music (known as “choreopoems”) while abandoning conventions of plot and character development. One of the most popular of these was her 1980 adaptation of Bertolt Brecht’s Mother Courage, featuring a black family in the time of the American Civil War. Some of Shange’s other works for the stage are Where the Mississippi Meets the Amazon (1977), Three Views of Mt. Fuji (1987), and The Love Space Demands: A Continuing Saga (1992).

Shange’s poetry collections include Nappy Edges (1978) and Ridin’ the Moon in Texas (1987). She also published the novels Sassafrass, Cypress & Indigo (1982), about the diverging lives of three sisters and their mother; the semiautobiographical Betsey Brown (1985); and Liliane: Resurrection of the Daughter (1994), a coming-of-age story about a wealthy black woman in the American South. In addition, Shange wrote a number of children’s books, including Whitewash (1997), Daddy Says (2003), and Ellington Was Not a Street (2004).

“Where there is a woman there is magic.”