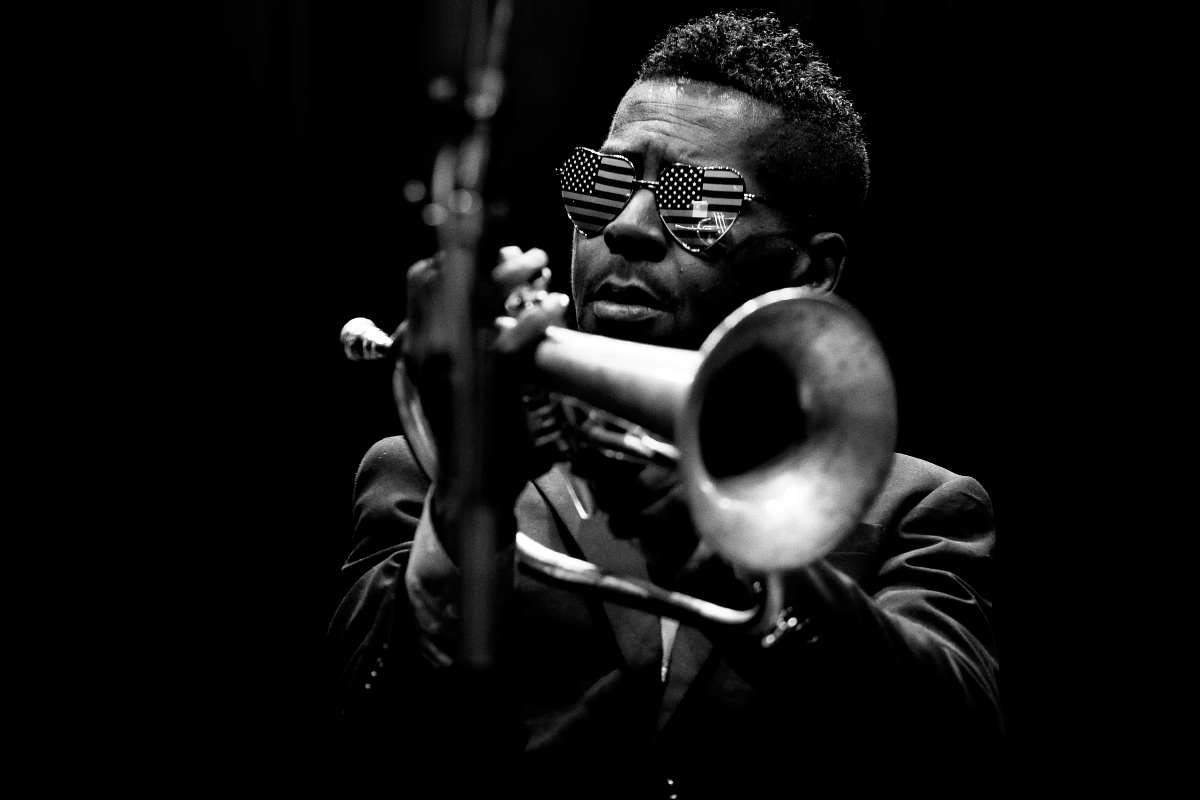 The ART | library deco editorial team is saddened by the news that the great jazz trumpeter, Roy Hargrove transitioned on November 2, 2018. He was 49 years old.

Roy Hargrove was born on October 16, 1969 in Waco, Texas. Hargrove was the bandleader of the progressive group The RH Factor, which combined elements of jazz, funk, hip-hop, soul, and gospel music. Its members have included Chalmers “Spanky” Alford, Pino Palladino, James Poyser, Jonathan Batiste and Bernard Wright. His longtime manager was Larry Clothier.

He manifested signs of musical aptitude as a young kid, and after borrowing an old Bundy cornet, was instructed from the elementary grades through junior high school by teacher Dean Hill. Hargrove soon became familiar with the recordings of Maynard Ferguson, Clifford Brown and Freddie Hubbard, and in the spring of 1987, he met the man who would galvanize his dreams of a professional career: trumpet superstar Wynton Marsalis.

When Marsalis made an unannounced visit to the Dallas Arts Magnet, Hargrove’s school, he was so impressed by the young man’s musical talents that he immediately arranged special studies for him. He also recommended the assistance of manager-producer Larry Clothier, and as a result Hargrove had the opportunity to travel to New York, and later to Europe and Japan. He soon became a member of the New York Jazz community, and under the supervision of Clothier started recording, as a sideman, with Bobby Watson, Ricky Ford and Carl Allen, as well as with Don Sickler’s Superblue band.

After graduating from High School in June 1988, Roy spent the Summer in Europe, where he had the opportunity to play in several major Festivals, sharing the stage with musical luminaries as Clifford Jordan, Jerome Richardson or Tete Montoliu. In the fall he entered college at the Berklee School of Music on various scholarships, including one from Down Beat magazine, which had selected him as best jazz soloist of the year. In 1990 Roy moved to New York, where he enrolled in the New School’s Jazz and Contemporary Music program.

The first recording -for RCA-Novus- of The Roy Hargrove Quintet (featuring altoist Antonio Hart), Diamond on the rough, appeared in 1990, and was followed by Public Eye in 1991. The summer of that year, Roy was featured at many European Festivals, fronting an all star package, The Jazz Futures.

The quintet’s third recording, The Vibe, which appeared in the spring of 1992, was highly rated by critics all over the world, and the band toured again Europe, Japan and the US. In 1993 tenor saxophonist Ron Blake replaced Antonio Hart, and with Blake, Gary Bartz and trombonist André Hayward, Roy recorded his fourth -and last- album for RCA-Novus, … Of kindred souls.

In 1993, before he was 25, Hargrove was already a major star in the world of contemporary Jazz, and was signed by Verve – Polygram, a label strongly committed to the promotion of young talent. For Verve Roy recorded The tenors of our time, an ambitious project featuring Johnny Griffin, Stanley Turrentine, Joe Henderson and Joshua Redman which appeared in 1994, Family (with David Newman as a special guest) and Parker’s Mood (a collection of tunes associated with Charlie Parker), both published in 1995.

In 1996, Roy’s band appeared in La Habana’s Jazz Festival, where they met pianist Chucho Valdes, of Irakere fame. Roy became fascinated with the talents of Cuban musicians, and decided to form a group featuring both Cuban percussionists, such as Anga, El Negro or Changuito, and African-American Jazz players such as Gary Bartz, Frank Lacy or Russell Malone. The group, known as Crisol (Spanish for melting pot) recorded live at the Orvieto (Italy) Jazz Festival, and the resulting CD, Habana, appeared in the market in 1997 with an imposing success. Crisol toured Europe in the Summer of 1997, and returned to Cuba in the fall of the same year.  Hargrove won his first Grammy Award in 1998 for the album Habana with Crisol, the Afro-Cuban band he founded.[1] He won a Grammy Award in 2002 for Directions in Music: Live at Massey Hall with co-leaders Herbie Hancock and Michael Brecker.

In 2000, Hargrove used a jazz sound with a lot of groove and funk, performing and recording with neo soul singer D’Angelo, resulting in Voodoo. Hargrove also performed the music of Louis Armstrong in Roz Nixon’s musical production “Dedicated To Louis Armstrong” as part of the Verizon Jazz Festival. In 2002, he collaborated with D’Angelo and Macy Gray, the Soultronics, and Nile Rodgers, on two tracks for Red Hot & Riot, a compilation album in tribute to the music of afrobeat pioneer Fela Kuti. He acted as sideman for jazz pianist Shirley Horn and rapper Common on the album Like Water for Chocolate and in 2002 with singer Erykah Badu on Worldwide Underground.