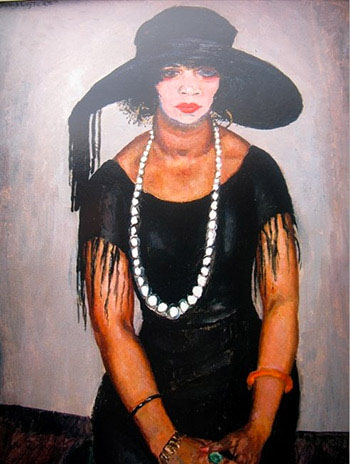 Years and years ago, a friend and I thought to write a movie. The film was the story of a Caribbean-born woman who leaves her island as a teen-ager; she’s employed as a kind of companion to the wife of a wealthy vacationing French family. The time: the nineteen-twenties. Once in Paris, the young woman, partly because of her talent—she’s a dancer, a performer—and partly because she’s black, becomes the toast of the town; she falls in love with a Corbusier-type artist and lives with him for a time in Switzerland, where they hang out at the Cabaret Voltaire, a chic, “avant-garde” boîte that was popular at the time. In fact, the film was named for that historic place. I never got any further with the story, and would have forgotten certain details altogether, had I not come across Jan Sluyters’s devastating 1922 painting “Portrait of Tonia Stieltjes” in “The Image of the Black in Western Art, the Twentieth Century: The Impact of Africa,” edited by the art historian David Bindman and the professor Henry Louis Gates, Jr. (The archivist Karen C. C. Dalton is an associate editor on the project.) In Sluyters’s sublime work, we see a woman of color dressed in black—black hat with a wide brim, black dress. With her red lips and heavily powdered face, she wears a mask over her mask: we cannot know her, but we, and Sluyters, want to know her—for the pleasure of her ultimately unfathomable nature.

This is the first part of the fifth volume in a series that has profound and moral depth—the cumulative effect of all the books in the series is to see the ways in which ethics, aesthetics, and looking are entwined, and the ways in which they are made even more complicated by culture and by class. In their thorough introduction, Bindman and Gates tell us about the history of the project. During the height of the civil-rights movement, the French-born, estimable Dominique de Menil and John de Menil, whose wide-ranging collection in Houston contained a vast amount of material relating to or representing blacks in Western art, thought to finance a series of books with beautifully produced plates and essays that would explore that history. The de Menils hoped that the books would help foster a greater understanding of black life (they had been encouraged by a priest friend to think of collecting as a form of meditation and charity). Sometime after Dominique de Menil’s death, in 1997, the books were discontinued. (John de Menil died in 1973.) Gates picked the project up, hence the present volume.

Continuing Reading the Article via The New Yorker